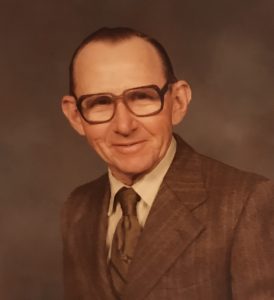 Graveside services will be held at 11:00 AM Saturday, September 23, 2017 at Hartsburg Union Cemetery with Rev. Barb Stroud-Borth officiating.

Carl was born August 3, 1922 in Hartsburg, IL., the son of John H. Lolling and Minnie Zieglowski.  He was best known as the “Keeper of the Graves” at Hartsburg Cemetery since 1960 having “retired” on May 28, 2017 at the age of 94.  He was also a farmer in Hartsburg for many years.  Carl served in the United States Army during WWII and received the Purple Heart after being wounded.  He was a member of the American Legion Post 1146 in Hartsburg and St. John’s Lutheran Church also in Hartsburg.

He was affectionately called Uncle Carlie by his nieces and nephews.  Carl was an honest, hard -working, loving, and kind man.  We rejoice for him that he has made his journey to the “hill”.

Memorial donations may be made to St. John’s Lutheran Church.