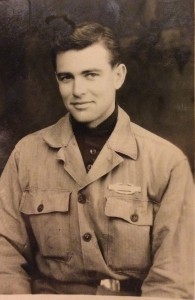 Visitation will be from 5-7 PM Wednesday, July 29, 2015 at Holland Barry & Bennett Funeral Home.
Funeral services will be 10:00 AM Thursday, July 30, 2015 also at the funeral
home with Pastor Dick Piscatelli officiating. Burial will follow in Walnut Ridge Cemetery with full military rites by the Middletown American Legion Post 672.

Ed was born November 16, 1929 in Greenview, IL., the son of Dennis Cecil and Lucinda Jane (Kurtz) Tibbs.
He proudly served his country in the United States Army during the Korean War. Overseas, he was a member of the 25th Infantry and Stateside he was a member of the 101st Airborne and the 5th Army Division. Ed was self employed as a Heavy Equipment Operator and Farmer. He was also a skilled wood and metal worker. He was active in his community in various organizations. He was a member of the Middletown United Methodist Church, the Middletown American Legion Post 672, the Land Improvement Conservation Association, was a volunteer for Middletown Fire and Rescue, was an elected official on the Corwin Township Board, and was instrumental in the remodeling of the Knapp Chestnut Becker Library where he built and installed the support beams. Ed enjoyed hunting and the outdoors and was a member of the NRA.

Surviving are his brothers Bob ( Jo) Tibbs of Williamsville, IL., and Harry (Jonie) Tibbs of Lincoln, IL. He is also survived by several nieces, nephews, cousins, and friends.
He was preceded in death by his parents and his brother Paul Irwin Tibbs.

In lieu of flowers memorial donations may be made to the Middletown American Legion Post 672 or to Middletown Volunteer Fire and Rescue and will be accepted at the funeral home.