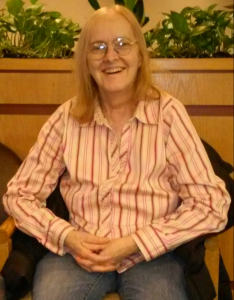 Charlotte Ann Parcelle, 58, of Lincoln passed away April 9, 2015 at St. John’s Hospice in Springfield.  Holland Barry and Bennett Funeral Home has been entrusted with her care.

A Celebration of Life for Charlotte Parcelle will be held from 5-8pm on Thursday April 16 at Jefferson Street Christian Church Fellowship Hall.

She was preceded in death by her father; her son Wesley Parcelle; three brothers Charles Smith, David Sullivan, and Calvin Sullivan; and a sister Brenda Sullivan.

Memorials may be made to the family and will be accepted at Holland Barry and Bennett Funeral Home.