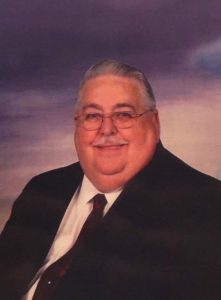 Visitation will be from 11 AM until 1 PM Thursday, February 15, 2018 at Holland Barry & Bennett Funeral Home. Funeral services will be at 1 PM Thursday also at the funeral home. Burial will follow in Steenbergen Cemetery, Mt. Pulaski, IL.

He married Virginia Gill on December 23, 1956 in Mt. Pulaski. They celebrated 56 years of a wonderful marriage. She preceded him in death on September 14, 2012. After her death he married Beckie Knowles on June 22, 2013 in Weldon, IL. She survives.

He was preceded in death by his grandparents, parents, 2 sisters, and his wife Virginia.

Clyde served in the United States Air Force for 8 years including bases in Nebraska, Greenland, Labrador, and Missouri. He attained the rank of Airman 2nd Class, working in administration. While in Greenland, he ran the base library for the troops there. After the Air Force he worked at and retired from both Caterpillar in Morton, IL. and Ball-Foster Glass in Lincoln, IL. Clyde was also in the ministry for about 30 years. He served at Full Gospel in Lincoln, Faith Tabernacle in Mt. Pulaski, Lincoln Southern Baptist in Lincoln, and retired recently from preaching at Weldon Baptist Church in Weldon, IL. He was a member of the Southern Baptist Association and the American Legion Post 263.

Clyde loved his children unconditionally and took great delight in being ornery with his grandchildren and great grandchildren. He enjoyed fishing, old western movies, and was the ultimate shade-tree mechanic and “straw boss” on any project.

One of the great desires of his heart was to lead people to a relationship with Christ.

There will be no way to fil the empty space he leaves behind. “Life is tough and God is good!”

Memorial donations may be made to St. Jude’s Children’s Research Hospital or to Weldon Baptist Church and will be accepted at the funeral home.