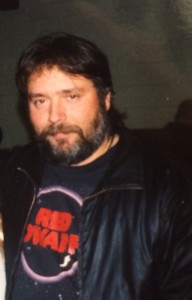 Cremation rites will be accorded. Visitation will be from 3pm until 6 pm Thursday, December 17, 2015 at Holland Barry & Bennett Funeral Home in Lincoln. Memorial services will be at 6pm Thursday also at the funeral home with Pastor Larry Crawford officiating.

David was born January 22, 1959 in Lincoln, IL., the son of Virgil Hugh and Loretta Ann (Shaw) Hudson. He married Sheryl VanCleve in December of 1979. Their love story crossed many boundaries and years. In September of 2014 they renewed their vows before God and their families. Sheryl preceded him in death on December 11, 2015. Just 18 hours after Sheryl passed away, David joined her. Unable to spend even 24 hours apart, Sheryl and David were reunited for eternity.

He was a member of Open Arms Christian Fellowship. David was an over the road truck driver for many years. He was a well known musician/bass player in several bands, beginning with Flatbush and ending with Traces N Time with Gary Osborne. He was a Harley Davidson enthusiast. He and Sheryl enjoyed riding their motorcycle together. He always made time for his grandchildren, they held a special place in his heart. David was also a John Deere enthusiast, even selling one of his motorcycles to buy a tractor. He enjoyed working on lawnmowers, watches, and anything mechanical. David and Sheryl considered many friends as family. They never turned anyone away and always made sure that everyone knew that they were loved and supported.

He was preceded in death by his grandparents, parents, and his wife Sheryl.

Memorial donations may be made to Open Arms Christian Fellwship or to the Susan Cohan Colon Cancer Foundation and will be accepted at the funeral home.