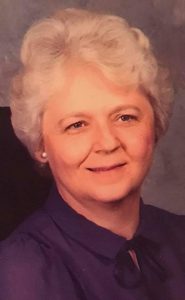 Visitation will be from 9 AM until 11 AM Saturday, August 18, 2018 at Prairieland Christian Church, Hartsburg. Funeral services will follow at 11 AM also at the church with Joe Sanders officiating. Burial will follow in Hartsburg Union Cemetery. Holland Barry & Bennett Funeral Home has been entrusted with her care.

Doris was a 1946 graduate of Missouri Valley High School in Missouri Valley, Iowa. She was a musician for most of her adult life. She taught music at Lincoln Developmental Center for 7 years, played for revival meetings that she held with Lois and Paul Benjamin, accompanied many soloists and choirs, and played piano and organ for many church services. Doris was a member of Prairieland Christian Church. She was a strong Christian woman. Doris enjoyed cooking and gardening. She enjoyed family history and was fond of her Lincoln name and it’s tie to American history. She was a wonderful example of faith and love to her family and all who knew her. She will be greatly missed and lovingly remembered.

In lieu of flowers, memorial donations may be made to Prairieland Christian Church.