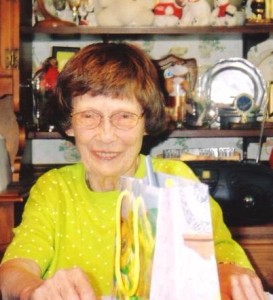 Dorothy Mae Amos (nee Vest) died Sunday, April 12, 2015, at Abraham Lincoln Memorial Hospital in Lincoln, Illinois.  She was born on November 1, 1924, in Lawrenceburg, Indiana, to Wilson P. and Mildred Baker Vest.  She graduated as valediction of her class at Lawrenceburg High School and then entered Indiana University where she majored in Latin and English.  Dorothy supported her own college education with work and scholarships.  She was president of Alpha Delta Pi sorority and is written up with special recognition in the sorority’s historical documents.  She was voted one of the ten most beautiful women on the Indiana University campus.  She was inducted into the Phi Beta Kappa honorary.

Dorothy married Jack S. Amos on August 31, 1946.  He preceded her in death on December 16, 1990.  She is survived by her daughter Nancy of Peoria, Illinois, her son Kirt of Lincoln, Illinois, and her sister Patricia of Cincinnati, Ohio, as well as by several nieces and nephews.  She is also survived by her beloved schnauzer Melvin who alerted the family when Dorothy first collapsed.  She was also preceded in death by her parents and by her brother Robert.

Dorothy taught Latin and English in a number of high schools in different states as the family moved.  She taught at Lincoln, Illinois, High School from 1968 until her retirement.  She also taught GED classes in the evening.  Dorothy was devoted to her students and was always looking for ways to help them prosper.

Dorothy trained schnauzers in obedience and agility trials.  She was a member of the Peoria Obedience Training Club and the Town and Country Kennel Club.  A wall and cabinet full of trophies display the many awards that she and her dogs won.

Dorothy was a life-long Cincinnati Reds fan and received recognition from them on her 90th birthday.  Her grandfather played professional baseball and she taught all who would listen to love baseball.

Dorothy loved animals, reading, Shakespeare, learning, and looking for unmet needs.  She volunteered for so many causes during her life.

Dorothy was woman of faith who did an untold number of acts of kindness for people for which she wanted no recognition.  She always liked to be out of the limelight.  Her ability to forgive others was a hallmark of how she lived her life.  She was a member of the United Methodist Church in Lincoln, Illinois.

To her children, she was a constant source of support and inspiration.  She put her life and goals on hold to support their goals and to give them health.