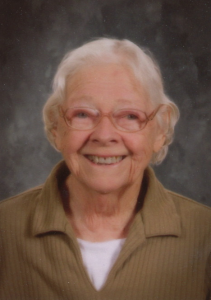 Georgia Fay Stubblefield, 93, of Lawndale, passed away March 16, 2016 at her residence.

She was born June 26, 1922 in Murphysboro, IL., the daughter of William and Bonnie Higgins. She married Robert C. Stubblefield in St. Charles, MO. in 1947. He preceded her in death.

She was a member of the First Baptist Church in Lincoln, The Oasis Senior Center, Jolly Seniors, the Lincoln Writer’s Club, and was a Foster Grandmother at Chester East School. A secretery, she was employed by Lincoln College; the Illinois Commission on Atomic Energy and Emergency Services and Disaster Agency in Springfield; and the Lincoln office of the American Red Cross before retirement.
She is survived by her son Stephen Stubblefield of Springfield and her sister in law Marjorie Hoskins of GA.
She was preceded in death by her parents, her husband, a son Ronald, and her brother Paul Higgins.

She was cremated and burial will be Wednesday, March 30, 2016 at 10 AM at Lawndale Cemetery.
Arrangements are being handled by Holland Barry & Bennett Funeral Home in Lincoln.