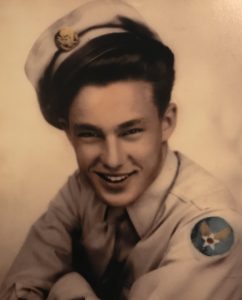 Gerald E. Hoskins, 88, of Lincoln, formerly of Keokuk, Iowa, passed away January 21, 2018 at The Christian Village.

A celebration of his life will be at 1 PM Thursday, January 25, 2018 at New Testament Christian Church in Keokuk. Visitation will be from 11 AM until 1 PM directly before the service at the church.

Gerald graduated from Keokuk Senior High School in 1955. He proudly served his country in the National Guard 168th Infantry and the Air Force during WWII.
A member of New Testament Church, Gerald was employed as a manager at Dryden Rubber Company, manager at McLaughlin Auto for many years, was concessions manager at the Skylark Drive-in Theater, and was the owner/operator of a pool hall where he always made sure neighborhood youth were fed and warm. He was a former Elder and was active in bible study with New Testament Church. He enjoyed fishing and taking family and friends on hunting trips.

He was preceded in death by his parents, his wife Betty, son Jay Gerald Hoskins, an infant brother, infant sister, and sister Rea Ceseber.

Memorial donations may be made to New Testament Church in Keokuk.

Holland Barry & Bennett Funeral Home in Lincoln, IL. has been entrusted with his care.