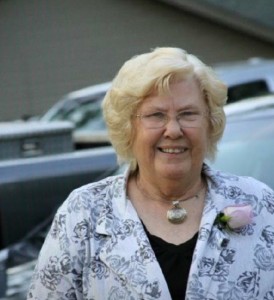 Gracie Evelyn Grass, 75, of Lincoln, passed away September 19, 2015 in Lawndale, IL. surrounded by her loving family.

Cremation rites have been accorded. A time of visitation will be from 4-7 PM Wednesday, September 23, 2015 at Armington Christian Church. Memorial services will be held at 10 AM Thursday, September 24, 2015 also at the church.
Holland Barry & Bennett Funeral Home in Lincoln is handling arrangements.

She was a well known waitress at the Dixie Truck Stop in Mclean, IL. and was also employed at Beich’s Candy in Bloomington for several years. After retirement she enjoyed working part time at the Blue Grass Golf Course in Minier and at Olympia West Grade School. Gracie was a member of Jefferson Street Christian Church in Lincoln, the Oasis Senior Center, and was active with the Relay For Life. She enjoyed playing cards, traveling with her son Troy, and spending time with her grandchildren.

She was preceded in death by her parents, her husband, her daughter Diane Grass, her son Loyd Grass, brothers Everett Brewster and Lawrence Brewster, sister Wanda Brewster, and grandson Kyle Hoffert.

Memorial donations may be made to Armington Christian Church.