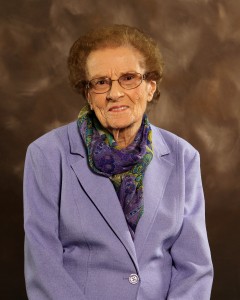 Helen was employed at ALMH for 20 years. After retiring, she volunteered at The Pink Shutter. She was a past Senior Regent of the Moose, Past Worthy High Priestess of Abraham Shrine 100 of the White Shrine of Jerusalem and a member of the Eastern Star. Helen was a member of the First United Methodist Church.

Visitation will be from 12:00Noon until 1:00 PM Friday, July 10, 2015 at Holland Barry & Bennett Funeral Home in Lincoln. Funeral services will be at 1:00 PM Friday, also at the funeral home, with Pastor Tami Werschey-Kessinger officiating. Burial will follow in Zion Cemetery, Lincoln.

In lieu of flowers, memorials can be made to Meals on Wheels and/or Abraham Shrine 100 and will be accepted at the funeral home.