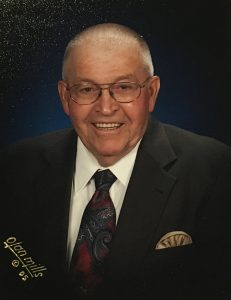 Henry Alan Steiger died on December 6, 2016 at The Christian Village.
He was born July 27, 1930 at home on the farm inDelavan, IL. He is the first son of Howard Henry and Opal Ruth Barbee Steiger. He attended Delavan’s Curtis Grade School and Delavan High School. He graduated from Purdue University with a degree in Agricultural Engineering in 1952. He served in the United States Army during the Korean War where he was a high speed radio operator in Japan. Upon completing his tour of duty he returned home to the family farm. On August 18, 1956, he married Marilyn Ann Doubet at the Hanna City Presbyterian Church. They moved to Lincoln, Illinois where he was a livestock and grain farmer. Marilyn preceded him in death on February 12, 2015.

Memorial donations may be made to The Christian Village.