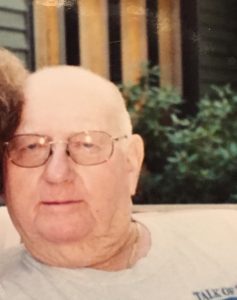 Cremation rites have been accorded by Holland Barry & Bennett Funeral Home. Graveside services with military rites performed by American Legion Post 263 will be held at 11 :00 AM Friday, October 14, 2016 at Elkhart Cemetery.

Mr. Buckles was born July 24, 1932 in Sangamon County, the son of J Walter and Betty Louise (Gilpin) Buckles. He retired from Davis Trucking. He was formerly employed at Harris Mcburney and PPG. He proudly served his country in the United States Army. He was a member of the 40 &8 , American Legion Pot 263, VFW Post 1756, and the Eagles Lodge 2708. He enjoyed hunting, gambling, being with friends, and drinking his whiskey and water.

He was preceded in death by his parents and brothers Charles Buckles and Frank Buckles.