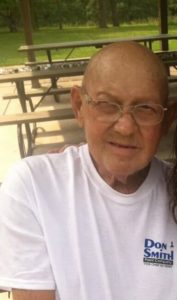 James Allen Wright Sr., 77, of Petersburg, passed away on May 28, 2016 at Sunny Acres Nursing Home in Petersburg. Cremation rites have been accorded by Holland Barry & Bennett Funeral Home, Lincoln. There will be no services at this time.

James was born April 4, 1939 in Lincoln, IL., the son of Leonial G. Wright and Dorothy M Humbert. He marries Sherry Thresher on September 18, 2004 in Union, IL. He was an auto body mechanic for several paces in Logan County. He was a member of the Eagles Lodge #2708.

He was preceded in death by his parents and his sister Jo Ann Schrader.

Memorial donations may be made to Holland Barry & Bennett Funeral Home for help with funeral expenses.