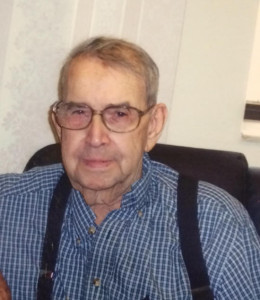 LINCOLN – James Richard Hutchison left his earthly burdens behind and went home to be with his Heavenly Father at 5:40 p.m., January 4, 2015 at The Christian Village in Lincoln.

Service: Friday, January 9 at 7 p.m. at the funeral home.

James Richard Hutchison left his earthly burdens behind and went home to be with his Heavenly Father at 5:40 p.m., January 4, 2015 at The Christian Village in Lincoln. His room in Heaven was finally ready.

He enlisted in the U.S. Army in 1941, serving during World War II as a Sargeant in the Army Air Corps. During that time, he earned a service stripe, six overseas service bars, a good conduct medal, a European African Middle Eastern Theater Ribbon, and an American Defense Service Ribbon. He separated from the Army in October, 1945. He was very proud of his service to his country and enjoyed sharing stories of his life during that time with friends and family.

Upon returning to Illinois and settling in Broadwell he began employment at Lehn and Fink in Lincoln and worked there for 37 years, until his retirement.

Hutch’s passion for the guitar and blue grass music was lifelong, as was his passion for chocolates. Even after moving to The Christian Village in April, 2014, he kept his guitar close to him in his room. He continued to play it, even though that became a challenge for him physically. During his life, he played at numerous blue grass festivals in the area.

Preceding him in death were his parents, his wife, his brothers George and Shelby Hutchison, and his very special friend and companion Nina Wellman.

A visitation will be held Friday, January 9, 2015, 5:00 to 7:00 p.m.at Holland Barry and Bennett Funeral home with the funeral service immediately following at 7:00 p.m. also at the funeral home. Ryan Edgecomb will officate. Burial will take place at 9:00 a.m. Saturday, January 10, 2015 at Kline Cemetery in Broadwell.