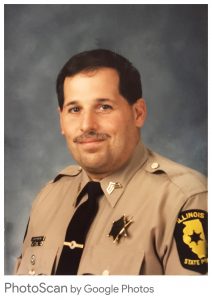 Jim was born January 20, 1954 in Bay City, Michigan, the son of Walter Anthony Skorzak and Virginia Earldine (Storrs) Skorzak. He married Carol Marie Cordray on May 25, 1974.

He proudly served his country in the United States Navy. He served his community for 25 years as an Illinois State Policeman, retiring as Master Sergeant. He was previously employed as a deputy in Boone Co. and as a Belvidere City Policeman. Jim enjoyed military history , American history, metal detecting; and football. He was an avid Green Bay Packers fan. His greatest treasure was his grandchildren. He spent as much time with them as possible.

He was preceded in death by his parents and his brother Tom Skorzak.

Memorial donations may be made in his memory to the Wounded Warrior Fund.