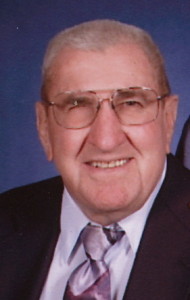 Graveside services will be held Monday, March 30, 2015 at 11:00 AM at Carlyle Cemetery, Lake Fork, IL.
Holland Barry & Bennett Funeral Home in Lincoln has been entrusted with his care.

Mr. Bryson was born July 22, 1937 in Lake Fork, IL., the son of John Bryson and Ethel Irene (Haynes) Bryson. He married Audrey Ott on May 29, 1959 in Lincoln, IL. Dean proudly served his country in the United States Army. He was a member of Lake Fork Christian Church and a member of the Land of Lincoln Antique Tractor and Engine Club. He was employed at Stetson’s in Lincoln, IL. for several years. He then was a truck driver for RAM Trucking and was a delivery driver for Stahl’s Furniture.

He was preceded in death by his parents and two sisters Elizabeth Ann Bryson and Lorna Jane Bryson.