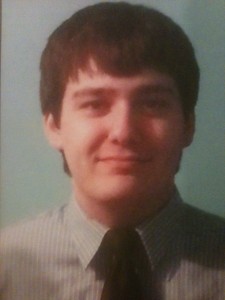 Visitation will be from 5-7 pm Sunday, July 12, 2015 at Holland Barry & Bennett Funeral Home in Lincoln. Funeral services will be at 11:00 AM Monday, July 13, 2015 at Holy Resurrection Church, Lincoln, with Bishop C. William Blythe officiating. Burial will follow in Holy Cross Cemetery, Lincoln.

Jonathan was born October 26, 1992 in Springfield, IL., the son of Robert and Darla (Yow) Franklin. He graduated from LCHS in 2011 and from ISU in 2015 with a Bachelor’s of Science in Chemistry. He was currently employed at Akorn Pharmaceuticals in Decatur, IL. Jon was previously employed as a host at Cracker Barrel in Lincoln, IL.
Jon loved adrenaline and thrills. He could often be found at various theme parks enjoying thrill rides with his friends. He was an avid gamer and loved computers. He often volunteered to work for the Lincoln Jaycee’s haunted house. His fun loving personality was felt by all who knew and loved him.

He was preceded in death by his grandparents.

In lieu of flowers memorial donations may be made to The National Multiple Sclerosis Society and will be accepted at the funeral home.