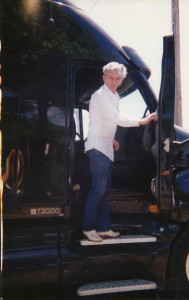 Graveside services will be held Friday, March 18, 2016 at 1 PMat Union Grove Cemetery, Greenville, IL. There will be no visitation.

Joe was born January 13, 1943 in Jon Ben, WV., the son of Charlie Wyatt and Georgia Myrtle Farley. He married Vicky Hatfield on January 13, 2003 in Lincoln, IL. He proudly served his country in the United States Army. He was an over the road truck driver for 39 years. He was a member of Lincoln Hill Free Methodist Church.

He was preceded by his parents, his sister Audrey Ammons, and his brothers Carl Farley and Lonnie Farley.

Memorial donations may be made to the family. Holland Barry & Bennett Funeral Home in Lincoln is handling arrangements.