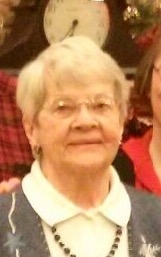 LINCOLN, IL – Josephine Marie Bolint Vodak, 89, of Lincoln, passed away on February 18, 2016. Josephine was born April 8, 1926 in Viola, Wisconsin. She was the daughter of John and Grace Bolint. She was united in marriage to Fred E. Vodak on September 8, 1944. Fred preceded her in death. She was also preceded in death by both of her parents and her sister. She is survived by daughter Sharon (Larry) Simonson of Lincoln, and son Freddie (Bonnie) of Reedsburg, Wisconsin, 5 grandchildren, and 9 great grandchildren. Josephine and Fred spent most of their married years as dairy farmers in Wisconsin. As a young mother, Josephine was very active in her children’s 4-H. She also enjoyed sewing, embroidering, and especially picnics. They also had several foster children and took a year off to serve as house parents at Cookson Hills Children’s Home. They moved to Lincoln in 1995 where they lived at the Christian Village for 18 years. Josephine spent her last three years at Castle Manor where she really enjoyed playing bingo. She was a member of Lincoln Christian Church. Her greatest love was God, Fred, and her family. There will be a memorial service (no visitation) at 10:00 a.m. Saturday, February 20 at Holland, Barry, & Bennett Funeral Home in Lincoln with Ryan Edgecombe officiating. In lieu of flowers, the family requests memorials be made to The Christian Village.