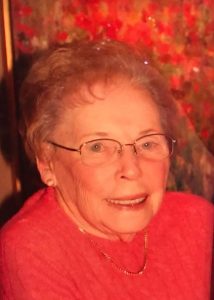 Judy was a dedicated wife and homemaker who provided care and support to her late husband, Harold W. Andes, whom she married on April 25, 1940 in New Holland, IL. and who passed away in 1973 at the age of 60. Judy was a loving mother, grandmother, and great- grandmother who enjoyed traveling and attending family gatherings.

Judy was also preceded in death by her parents, George and Hanna Buse; brother Wilbur Buse, and sister in law, Marion Buse.

In lieu of flowers, memorials may be made to the charity of the donor’s choice. Condolences may be expressed to the family online at ww.hbbfh.com.

Visitation will be from 10 AM until 11 AM, Wednesday, March 14, 2018 at Holland Barry & Bennett Funeral Home in Lincoln, IL. Funeral services will be held at 11 AM also at the funeral home with Pastor Ron Otto officiating. Burial will follow in New Union Cemetery, Lincoln, IL.