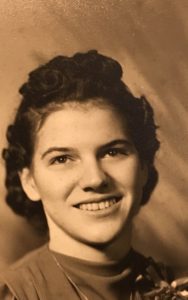 Visitation will be from 11 AM until 1PM Monday, July 25 , 2016 at Holland Barry & Bennett funeral Home. Funeral services will follow at 1PM also at the funeral home with Ryan Edgecombe officiating. Burial will follow in Zion Cemetery, Lincoln.

Mrs. Grimm was a homemaker. She was a member of the First United Methodist Church, Lincoln. She was an avid Illini fan. She enjoyed baking, reading magazines, playing cards, and family get togethers. She was a loyal participant in the Publisher’s Clearing House Sweepstakes and just knew she was going to win every year.

She was preceded in death by her parents, her husband, 5 brothers, and 1 sister.

Memorial donations may be made to The Christian Village Activity Fund or to First United Methodist Church, Lincoln.