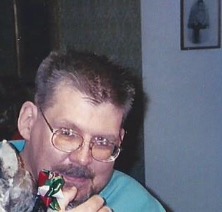 Kirt V. Amos of Lincoln, Illinois, died December 29, 2015, at home. He was born on July 11, 1953, in Goshen, Indiana, the son of Jack S. and Dorothy M. Amos. Kirt was a graduate of Lincoln Community High School and Illinois State University. He worked in industry in Lincoln, Illinois, until his retirement.

Kirt was a quiet man who suffered physical and mental illnesses without complaint. He was often misunderstood. Kirt was confirmed into the Church Universal at First United Presbyterian Church in Pemberville, Ohio. He had an abiding sense of the need for social justice. He never passed by a homeless person without giving money even though he had little money to give. When asked what most annoyed him, he would always reply with a comment about how he was upset by the lack of justice and understanding for some people. His life was marked by his nonjudgmental approach and his lack of dependence on material things.

Kirt was named after his great-grandfather, Kirtley Baker, who played professional baseball. Kirt loved the game. He would make trips to cities just to see a baseball game. He was an avid Cubs fan and could list baseball facts and trivia expertly.

Kirt received a double transplant of a new kidney and liver at the Mayo Clinic in Rochester, Minnesota. It is the kindness of this donor’s family that allowed him to have extra years of life.

Kirt was preceded in death by his parents and his maternal and paternal grandparents. He is survived by his sister, Nancy, of Peoria, Illinois, his canine companion, Melvin, his aunt Patricia Roeller of Cincinnati, Ohio, and by a number of cousins.

A graveside service will be held at 11:00 a.m. on Monday, January 11, 2016, at Elkhart Cemetery in Elkhart, Illinois, followed by a memorial service at Holland, Barry, and Bennett Funeral Home in Lincoln, Illinois at 1:00 p.m.

Memorials may be made to The Humane Society of Logan County, Attn.: Tributes and Memorials Staff, P.O. Box 404, Lincoln, Illinois 62656 or to Alcoholics Anonymous District 19 Treasurer, P.O. Box 7202 – Springfield, Illinois 62791 directed to the Land of Lincoln Group.