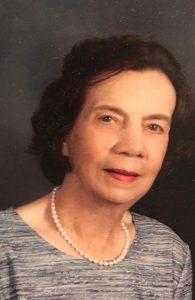 Laurel L. Baker, 92, of Morton, passed away July 4, 2018 at the Apostolic Christian Restmor Home in Morton.

Visitation will be from 11 AM until 12 Noon Tuesday, July 10, 2018 at Holland Barry & Bennett Funeral Home, Lincoln. Funeral services will be at 12 Noon also at the funeral home. Burial will follow in New Union Cemetery, Lincoln.

Laurel was born February 3, 1926 in Lincoln, IL., the daughter of Raymond P. Purviance and Mildred I. (Reichle). She married Roy S. Baker on January 6, 1952 in Lincoln. He preceded her in death on December 22, 2016. He passed 15 days before their 65th wedding anniversary. Roy was employed at Caterpillar for 44 years, holding a management position for 40 of those years. Laurel attended Lincoln primary schools and was a graduate of Lincoln Community High School. She was employed at the Illiopolis War Plant, the office of Abraham Wilensky, M.D. in Lincoln, and Lehn and Fink Corp. She was a cub scout den mother, a housewife, and enjoyed working outside with flowers and traveling with family. She and her husband shared a love of Big Band Music, especially Lawrence Welk. She was of the Methodist faith.

In lieu of flowers, memorial donations may be made to the American Diabetes Association.