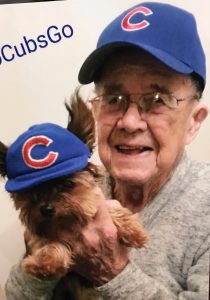 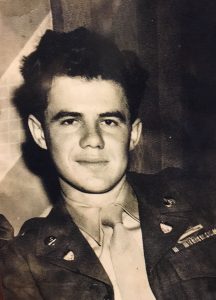 Visitation will be from 10 AM until 11 AM Wednesday, May 3, 2017 at Holland Barry & Bennett Funeral Home.  Funeral services will be held at 11 AM Wednesday also at the funeral home.  Burial will follow in St. Mary’s Cemetery with full military rites provided by the American Legion Post 263.
Leo was born December 12, 1925 in Lincoln, IL., the son of Stanley and Catherine Theresa (Pelc) Pushala.
He proudly served his country in the United States Army during WW II.  He was a member of Holy Family Catholic Church.  Mr. Pushala retired in 1985 from Pittsburg Plate Glass after many years of service.  He was a gentle man who always had a smile. Leo was a life long Chicago Cubs fan.   He will be greatly missed by all who knew and loved him.  Leo was the last living member of his immediate family.
Survivors include:  loving companion and dear friend Elaine Klockenga of Lincoln and her family:  Kevin (Millie) Klockenga,  Aaron (Ashley) Klockenga, Lexee Klockenga, and Adrienne Klockenga; local niece and nephew Diane (Bob) Farmer and Richard Caplinger.  Also surviving are several other nieces, nephews, cousins and friends.
He was preceded in death by his parents and his siblings:  John Pushala, Stanley Pushala, Genevieve Caplinger, Joseph Pushala, Catherine Gaffney, Ann Kutahn, Margaret Hagen, and Josephine Gorence.
Memorial donations may be made to the organization of the donor’s choice and will be accepted at the funeral home.
Send Condolences