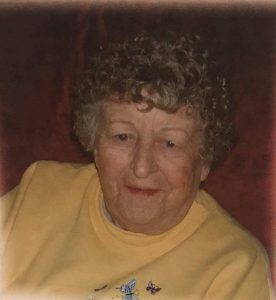 Lila Pearl (Cox) Bruns went to be with her husband Robert A. Bruns on January 26, 2018 at The Christian Village.

Lila was born on November 5, 1927 at the family farm house in Waynesville, IL to John William and Effie Mildred (Rich)Cox. She attended Prairie Creek Grade School in Waynesville and then attended Hartsburg High School where she graduated in 1945. Lila was a prom
attendant her junior year of high school. She moved to Bloomington where she worked at State Farm Insurance until her marriage to Bob on November 15, 1947 in Elizabethtown, KY. They moved to Hartsburg, IL. where Bob ran the gas station and Lila managed the motel and worked the telephone switchboard which were all located close together right along old route 121.

Lila had two sons, Roger (Kathy – caretake for Lila) of Lincoln and
Steve (Peggy) of Nevada, IA. Lila had six grandsons and one granddaughter: Patrick (Bonnie), Aaron (Stacey), Amanda Ahner (Andy),Cory (Sasha), Matthew (Michelle), Richard (Jennifer), and Neil. She also had twelve great grandchildren which were the highlight of her life: Brenley, Ashlan and Bentley, Dominic, Victoria, and Amiriah, Adyson and Alex, Mykayla and Mason, Ryerson, and Emily, and one great grandson Elliot due in April.

Lila retired from the Illinois Department of Registration and Education giving state board exams from 1963-1987.

She was preceded in death by her parents, husband, a brother John R.

(Bud) Cox, a sister Janette Evans, and two great grandchildren,infants, Frankie and Emma.
Services for Lila will be at 11:00 AM Monday, January 29, 2018 at Holland Barry & Bennett Funeral Home with visitation one hour prior to
the services. Burial will follow in Hartsburg Union Cemetery.

Memorial donations may be made to The Christian Village Congregate Building where she resides for several years and will be accepted at the funeral home.