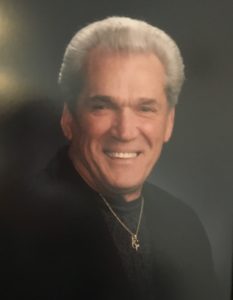 Visitation will be from 10 AM until 11:30 AM Saturday, June 11,2016 at Holland Barry & Bennett Funeral Home in Lincoln. Funeral services will follow at 11:30also at the funeral home with Father Laible officiating. Burial will follow in St Mary’s Cemetery.

Lloyd was born April 29, 1928 in Slater, MO., the son of Lloyd Tribble Havron Sr. and Mary E. Kauzlarich. He attended St Mary’s Catholic school and graduated from Lincoln Community High School in 1947. He married Beverly Siedler in 1949. She preceded him in death in 1953. He later married Barbara J Grubb in 1956. She preceded him in death in 1996.
Lloyd proudly served his country in the United States Marine Corp from 1954-1957. He was a member of Holy Family Catholic Church, the Eagles Lodge 2708, and the American Legion post 263. He was distribution supervisor for Ameren Cilco for 43 years, retiring in 1990. Lloyd was an avid fisherman and camper. He enjoyed fishing in the North Woods with his son.

Surviving are his son Brian (Wendy) Havron of Lincoln, his companion of many years Hazel Sporer of Lincoln, and sister Betty Deiss of Mason City.

He was preceded in death by his parents, brother Carson Ward, and sister Jean Davis.

In lieu of flowers memorial donations may be made to Carroll Catholic School.