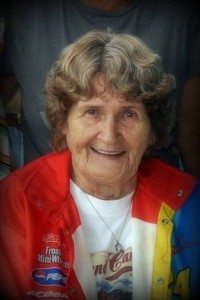 Mabel Ruth Skelton, 91, of Middletown, Illinois passed away at 12:58 a.m. on Monday, March 30, 2015 at home surrounded by her loving family.
Mabel was born on February 23, 1924 in Ina, Illinois, a daughter of Joseph Ennis and Helen May (Barker) Wilson. She married Richard Raymond Skelton on April 1, 1940 in Palmyra, Illinois. He preceded her in death on August 22, 1963.
Mabel is survived by her companion of over four decades, Bill Quast of Middletown. Other survivors include three sons, Dick (Debbie) Skelton of Lincoln, Tim (Judy) Skelton of Mason City, and Rusty (Stacie) Skelton of Middletown, seven daughters, Jenny (Harold) Stout of Middletown, Jackie Poole of New Holland, Carol Renfro of Middletown, Sharon Marcum of Seattle, Debbie (Bub) Frakes of Middletown, Syb (Joe) Liesmanof Hartsburg, and Kelly (Rick) Hoffert of Middletown, and Bill’s children Charlie Quast of California, and Becky Quast of Middletown. As matriarch of her family, Mabel left a legacy, at last count, of nearly 300 children, grandchildren, great grandchildren, great-great grandchildren, and even great-great-great grandchildren.
She was preceded in death by her father, mother, husband, and nine children, sons Jerry Skelton, David “Pip” Skelton, Andrew “Joe” Skelton, Billy Dale Skelton, daughters Patsy Skelton, Deany Baker, Kasey Brooks, Ruth Ann Hoffert, and Cheryl Himes.
She was the last of her immediate family which included brothers Carl Wilson, Ivan Wilson, and Boone Wilson and sisters Reba Sparks, Cleta Scott, and Ava Morrison.
Mabel spent most of her adult life as a housewife and mothercaring for and loving her family. She reminisced about delivering the paychecks to the miners at the Johnson Coal Mine at age 12. In 1943 she worked at the Sangamon Ordinance plant at Illiopolis during WWII. Mabel had driven a semi and had worked at the Stetson China Factory in Lincoln. Over the years she also worked in local eateries making and serving up home-style food. In her younger years she enjoyed fishing and camping. She loved working in her garden, sewing, making crafts, cooking, and baking. Most of these skills were passed onto her children and grandchildren. She babysat for several generations of children, both related and unrelated. Mabel was known, loved and respected by so many people. She loved country music, putting together puzzles, was an avid NASCAR fan, with Jeff Gordon being her favorite driver, and she cheered on the St. Louis Cardinals.
Cremation rites have been accorded. She requested no visitation.
A graveside service will be conducted at Irish Grove Cemetery, southwest of Middletown at 1:00 PM Saturday, May 2, 2015.
Holland Barry & Bennett Funeral Home in Lincoln handled the arrangements.