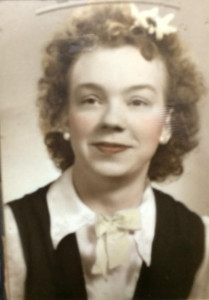 Service: 11 a.m. on Tuesday at the church

Marian Louise Ackman, 91, of New Holland, passed away January 28, 2015 at Symphony of Lincoln.

Visitation will be from 10 a.m. to 11 a.m. Tuesday, February 3, 2015 at New Holland Methodist Church. Funeral services will be at 11 a.m. on Tuesday also at the church with Rev. Becky Barrow officiating. Burial will follow in Richmond Grove Cemetery. Holland Barry & Bennett Funeral Home has been entrusted with her care.

Marian was born December 17, 1923 in McDonough County, the daughter of Glenn Cooley and Minnie Louise (Morrow) Cooley. She married James W. Ackman. He preceded her in death on April 16, 2000.

Mrs. Ackman was employed in housekeeping at Abraham Lincoln Memorial Hospital for several years. She was a member of a square-dancing club since 1962. She was also a member of the Antique Car Club and the United Methodist Women. She loved to spend time with her grandchildren and her great grandchildren.

She was preceded in death by her parents and her husband.