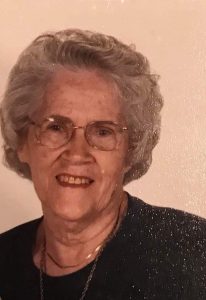 Visitation will be from 4-6 PM Sunday, April 29, 2018 at Holland Barry & Bennett Funeral Home with a rosary service at 3:30 PM. Funeral Mass will be at 10 AM Monday, April 30, 2018 at Holy Family Catholic Church with Father Laible officiating. Burial will follow in Holy Cross Cemetery.

Marie was born March 14, 1928 in Jersey City, New Jersey, the daughter of John and Mary (Crosby) Riedinger. She married Kenneth Benjamin Ebelherr on February 16, 1952. He preceded her in death on November 2, 2003.
Marie was the last surviving adult of the group that moved from the Bronx, NY to open the Eaton/Cutler Hammer plant in Lincoln in 1958. She was a member of Holy Family Catholic Church where she served as a Eucharistic minister and on the altar and rosary society. She was employed as a secretary at the Logan County Health Department for many years, retiring in 1990.

She was preceded in death by her parents, husband, son Kenneth “Rabbit” Ebelherr, and great grandchildren Andrew and Allison Hill.

In lieu of flowers, memorial donations may be made to Carroll Catholic School.

Holland Barry & Bennett Funeral Homehas been entrusted with her care.