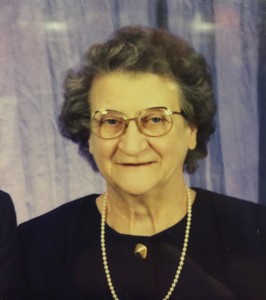 Marie T. (Jacobs) Allen passed away on December 29, 2015 in Lincoln, IL.
She was born on July 28, 1923, the daughter of Charles Jacobs and Margueritte Shalla. She married Charles E. Allen on June 28, 1941 in Mason City, IL. From this union was born Rose Marie Allen who resides in Albany, OR. and Carolyn Sue Cecil (Tom) who resides in Lincoln, IL.

She was preceded in death by her husband in 2005; her parents; a sister Dorothy Norris; brother Richard Jacobs; and a infant brother.

Marie and Charles lived in Mason City, Galesburg, Streator, and Lincoln during their years together. They were snowbirds and after retiring stayed in many states in their Avion during the winter months, but always returned to Lincoln to spend the summer with their grandsons.

Visitation will be from 10 AM until 11 AM Tuesday, January 5, 2016 at Holland Barry & Bennett Funeral Home. Funeral services will be at 11 AM Tuesday also at the funeral home with Ryan Edgecombe officiating. Burial will follow in Zion Cemetery, Lincoln.