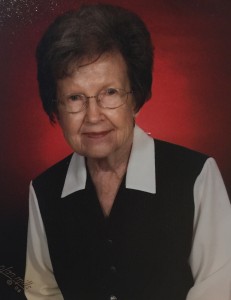 Marjorie L. Manus Douglas, formerly of Emden, passed away Tuesday, April 5, 2016 at The Christian Village Nursing Home in Lincoln, IL. She was born July 7, 1926 in San Jose, IL., the daughter of Wesley and Mabel Eyrse Manus. Marjorie married James Douglas Jr. on November 17, 1956 at Zion Methodist Church in Emmington.  He passed away July 5, 1995.

Marjorie is survived by her siblings, Leonard Manus (Dorothy Van Gerpan, deceased) of Delavan;Betty Lessen (Galen, deceased) of Lincoln; and Nancy Bammann of Lincoln. Also surviving are a step-brother John Hanlon of rural Eden and three step- sisters: Mary Bhalla of Lisle, Sharon Myers of Denton, TX., and Shirley Burkhardt of Joliet, along with numerous nieces and nephews.

Upon graduating from business school, Marjorie was employed with Great Central Insurance Company in Peoria for seven years and with the Illinois Auditor’s Office in Springfield for four years until her marriage to Jim. After their marriage she became a homemaker and farmed with her husband near New Holland for thirty four years before retiring and moving to Lincoln in 1990.

She was a past member of Emden Methodist Women, the Richmond Community Club of New Holland, and the New Holland Women’s Club. She enjoyed sewing, doing needlework, and gardening while living on the farm with her husband.

In lieu of flowers, memorial gifts in Marjorie’s name may be given to The christian Village Nursing Home, First United Methodist Church of Lincoln, or the Abraham Lincoln Memorial Hospital Foundation in Lincoln.

Visitation will be held at the First United Methodist Church, 302 Broadway, Lincoln, from 5 to 7 PM on Sunday, April 10, 2016. Graveside services will be held at Richmond Grove Cemetery, rural New Holland, at 10 AM on Monday, April 11, 2016 with Chaplain Ryan Edgecombe of The Christian Village officiating. Holland Barry & Bennett Funeral Home in Lincoln has been entrusted with arrangements.