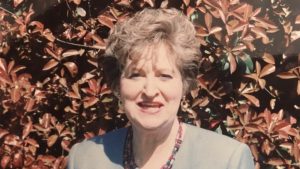 Marj was born on January 6, 1936 to James D Moriearty and Lucille (Carson) Moriearty.  She was #8 of 11 children in a very close knit Irish family.  Marj blossomed into the social butterfly of the bunch.  She reigned as Logan County Fair Queen of 1953.  After graduating from Lincoln Community High School, she married her high school sweetheart, H. Jack Poffenbarger on January 9, 1955 in Lincoln, Il.

Marj was a woman of uncompromising integrity and was a wonderful role model for her six children:  Kathy (Poffenbarger) Gura, Kevin Poffenbarger, Tim (Liz) Poffenbarger, Jeff Poffenbarger, Becky Poffenbarger and Jon (Dione) Poffenbarger, her 18 grandchildren and 9 great-grandchildren.  Lovingly named by her grandkids as Gram, Ginnie and Mimi, Marj appreciated each child’s unique personality, talents, quirks, and gifts.  They could never do any wrong in her eyes.  She never tired of spending time with them, recognizing their individuality and creating a special bond with each one.

Marj loved nature and discovered she was a natural with the camera.  She never went anywhere without her camera in tow.  She spent as much time as possible photographing God’s beauty and creatures, be it bugs, frogs, trees, mushrooms, flowers, birds or butterflies – they all were subjects in her quest to capture mother nature at her best.  A camera was always around her neck at every family gathering as well, capturing candid moments and memories.   Marj also had a passion for gardening and planted flowers wherever she could.  She claimed “Digging in the dirt, I am close to nature and the spirit above”.

Marj was a long-standing member of Christ Church Unity in Augusta, GA and served on the board of directors, as a prayer chaplain and taught Sunday school.  She was known as “The Flower Lady” on Central Avenue in Augusta, GA for many years for her beautiful plantings at her church.

She lived a life of service and volunteered everywhere she lived, wherever there was a need or a cause.  Her door was always open to anyone in the neighborhood and beyond.   She was an accomplished pianist and spent many years while living in Joliet, IL, accompanying band and choir students for recitals and contests, for plays & musicals at Washington Junior High School and at Christian Science Church.  She never said no to anyone that needed her, no matter the reason, even while running a household of 8 people.

Her love for the elderly was uppermost in her heart evidenced her entire life by the many seniors she would meet, gracing the family table for the holidays or Sunday dinners, playing the piano at senior centers or events, chaueffering anyone in need of a ride to the store, the doctor, church and making lifelong friends each time.  While living in Augusta, GA, she recognized the vast talents, knowledge and contributions seniors had to offer and needed to be recognized.  She took her ideas and passion for service to the director of her local television station in Augusta, GA. and a 30 minute show, “50 Plus” was born.  Marj was the sole host for this creation weekly, focusing on the senior community, offering information on alternative therapies, health, upcoming events and interviews with people of interest from all walks of life.  Marj was an excellent writer as well, not only in her letters to family and friends, but regularly for the Senior News in Augusta, GA.  She provided articles on a variety of subjects, including interviews with many local professionals in the area.  Her show aired for over 10 years until her illness caused her to resign.

Described by all who knew her as a classy, beautiful, intelligent, lovely,determined, dedicated, talented, caring and wise person, her soul will live on in the many lives she encountered and will be missed forever.

A Memorial Celebration of Life will be held in Lincoln, IL at a later date.