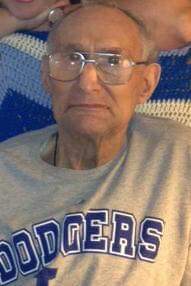 Visitation will be from 12 noon until 1pm Monday, June 25, 2018 at Holland Barry & Bennett Funeral Home. Services will follow at 1pm. Burial will be in Irish Grove Cemetery, Middletown following services with full military rites provided by the American Legion Post 263.

Marshall was born October 9, 1933, the son of Wilbur and Mildred ( Jones) Sanders. He married Margaret Gray in 1965. She preceded him in death in 1985. He married Belva Adams in 1987. They later divorced, however she remained his friend and caregiver.

Mr. Sanders proudly served his country in the United States Army during the Korean conflict. He attended Lincoln school. Marshall was a member of the Odd Fellows and attended Full Gospel Evangelistic Center. He retired from the bottle factory in 1998 after 46 years.
He was an avid Dodgers fan.

Surviving are his siblings: David
( Genett) Sanders of Round Rock TX, Rosemary Awe of Lincoln, and Robert (Sandy) Sanders of Lincoln; many nieces, nephews, step children, and friends also survive.

He was preceded in death by his parents, wife Margaret, and brother Dean Sanders.