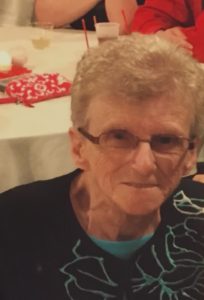 Cremation rites have been accorded. A memorial gathering will be held from 11 AM until 1 PM Thursday, July 7, 2016 at Holland Barry & Bennett Funeral Home, Lincoln. Memorial services will follow at 1 PM also at the funeral home on Thursday. Burial will be at a later date.
Mary was born October 19, 1932 in Atlanta, IL., the daughter of Russell Allen and Bessie (Troxel) Garriott.  She was of the Lutheran Faith and was a charter member of Faith Lutheran Church in Lincoln. She retired from Lincoln Developmental Center, was formerly employed in Dietary at ALMH, and currently was employed as a demo clerk at Sams Club in Bloomington/Normal. Mary enjoyed the casino and playing slot machines. She enjoyed puzzles and Legos and was an avid Chicago Cubs and Chicago Bears fan. She was a gamer, especially Donkey Kong.
Surviving are her children: Ruth (Jeff) Trimble of Bloomington, Roger (Sally) Gosda of Lincoln, Susan (Neil) Napolitano of Bloomington, and Rich (Allison) Gosda of Hickory, NC.; brother Kenny (Linda) Garriott of Lincoln, sister in law Wanda Garriott of Jacksonville, IL.; grandchildren: Amanda Trimble of Bloomington, Chris (Misty) Gosda of Decatur, Kelly (Kyle) Gleason of Lincoln, Katie Gosda of Lincoln, Sam, Matthew, and Michael Napolitano of Bloomington, and Luke and Joel Gosda of Hickory, NC. One great granddaughter Charlee Sue Gleason is due to arrive in August.

She was preceded in death by her parents, infant brother Russell Garriott, and brother Gene Garriott.

Memorial donations may be made to OSF St. Joseph Medical Center, Bloomington and will be accepted at the funeral home.