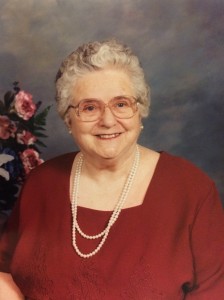 Mary Katherine Hurley, 87, 0f Lincoln, passed away Friday, June 5, 2015 at St. Clara’s Manor.
A funeral for Mary will be held at 1:00 PM Wednesday, June 10, 2015at Holland Barry & Bennett Funeral Home with Pastor Ron Otto officiating. Visitation will be one hour prior to the service. Burial will follow the service in New Union Cemetery.

She was a lifelong resident of Lincoln and a member of the Lincoln High School Class of 1946. She was a member of Lincoln Christian Church where she was involved in the Jolly Seniors Group. She was born March 9, 1928, the daughter of Herman and Mary (Ryan) Meacham. She married Elmer L. Hurley, also of Lincoln, on March 19, 1949. They moved from a farm south of town to 1224 Pekin Street in 1956. Elmer preceded her in death on October 18, 1993.

Mary is survived by four nephews, three nieces, and their children.

She was preceded in death by her parents, her husband Elmer, and her brother John H. Meacham.