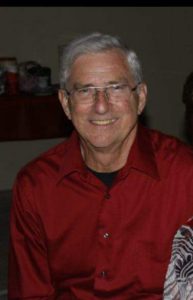 Maurice G. “Morey” Doolin, 74, of Lincoln, joyfully joined his Savior in Heaven on Tuesday, April 10, 2018 after a courageous battle with cancer.

Visitation will be from 5-7 PM Friday, April 13, 2018 at Open Arms Christian Fellowship. Funeral services will be at 11 AM Saturday, April 14, 2018 also at the church with Pastor Larry Crawford officiating. Burial will follow in New Union Cemetery, Lincoln. Holland Barry & Bennett Funeral Home has been entrusted with his care.

Maurice was born June 30, 1943 in Pinckneyville, IL., the son of Phillip and Lucille (Koenigstein) Doolin. He married Donna Sparks on June 12, 1965 in Lincoln. They celebrated 52 years of marriage.
He proudly served his country in the United States Army during the Vietnam era.

Maurice was employed as a lineman and serviceman for Ameren/Cilco for 33 years. He was part of the building committee for Zion Lutheran School and oversaw the renovation of the Scully Building for Integrity Data. Most importantly, Maurice built his family as his legacy. Together, they enjoyed camping, boating, family time spent together and he especially enjoyed cutting firewood. He could often be found joking and having fun. He spent the majority of his retirement helping others. Maurice cared about the community and was always mindful of ways that he could lend a helping hand. He was an Elder at Open Arms Christian Fellowship and was instrumental in organizing Prayer in the Park. He was a light and a witness and will be missed by all who knew and loved him.

He was preceded in death by his parents and brother Kenny Doolin.

Memorial donations may be made to Open Arms Christian Fellowship.