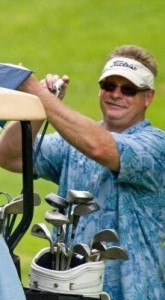 Melvin Jackson Darlington Jr. “Mel”, 53, of Hartsburg, passed away December 7, 2015 at his residence.

Visitation will be from 10 AM until 1PM Saturday, December 12, 2015 at Holland Barry & Bennett Funeral Home. Funeral services will be follow at 1 PM also on Saturday at the funeral home. Cremation rites will then be accorded.

Mel was born April 23, 1962 in Los Angeles, Ca., the son of Melvin Jackson Darlington Sr. and Noelle LaCourt. He married Marsha Caulkins on November 17, 2001. He retired from Illinois Correctional Industries and was currently working as a teacher’s aide at the Hartsburg Emden Grade School. Mel was a member of the Eagles Lodge Number 2708 and the Lincoln Elks Lodge #914. He was an avid bowler and golfer and was a die hard Chicago Cubs fan.

He was preceded in death by his father and his sister Patricia “Patti” Smith.

Memorial donations may be made to the Hartsburg Emden Grade School and will be accepted at the funeral home.