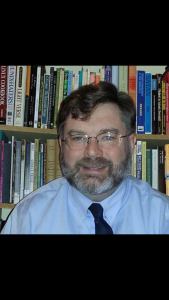 Michael James “Mike” Reid, 49, of Lincoln, formerly of Lawrenceville, IL unexpectedly made his final journey to the next life on Tuesday, November 8, 2016.
Mike was born in Lawrenceville on July 24, 1967, to Jim and Dianne Ernst Reid. He was Valedictorian of Lawrenceville High School’s Class of 1985 and received a Bachelor of Arts degree in counseling from Johnson Bible College in Tennessee, graduating Magna Cum Laude. He went on to complete a Master of Library Science in Information Services from the University of Illinois and a Master of Arts in Philosophy and Theology from Lincoln Christian University. A true bibliophile, Mike loved his career as Assistant Librarian at Lincoln Christian University. He had published several articles in his field, some in collaboration with his colleague and supervisor, Nancy Olson. An avid comic collector and geek culture enthusiast, Mike was a man with many interests, who read nearly anything he could get his hands on. He was a lifelong learner, always seeking knowledge and understanding and investigating new ideas. His jokes, discussions of life, and wit will be long remembered by all who knew him.
Mike married his long time friend, Julie Gregory Reid Young in 1988. During their 17 years of marriage, his children Nathaniel James Reid, 21, of Carbondale, IL and Kara Madelaine Reid, 16, of Salem, IL were born. His children were the light of his life and the most important people in his life.
He married a very good friend, his love and life partner, Ruth Maloney Halpin Reid on June 27, 2015. They created a loving home for their blended family. Mike’s absence from this life will be felt by his wife and family as well as friends, colleagues and acquaintances worldwide.
Mike is survived by his wife, Ruth; his children, Nathaniel and Kara; and step-children, Michael and wife Casey, Shannon, and Cameron Halpin of Lincoln. Other survivors include his father, Jim and wife Sherrie Reid of Texas; his step-father, Leslie Harlan of Lawrenceville; siblings, Jim and wife Georgia Harlan, Dennis Harlan, Steven and William Harlan, Laura and husband Terry Lawrence, Jeff and wife Laurie Reid, Janet Harlan, Jeannette Harlan, John and wife Theresa Reid, Heather and husband Jesse Schernekau, and Amy and husband J.D. Dolkey; as well as countless nieces, nephews, and other extended family members.
He was preceded in death by his mother, Dianne Harlan; and his grandparents, Harry and Marguerite Waltrip, and Charles and Lola Reid.
Mike was a selfless, loving, amazing man and will leave a void in the world he leaves behind. He made our world a better place for all of us.