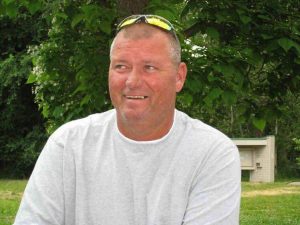 Visitation will be from 4-6:30 PM Monday, July 23, 2018 at Holland Barry & Bennett Funeral Home. Funeral services will be at 6:30 PM also at the funeral home. Cremation rites will follow. There will be no burial at this time.

Mike was born October 27, 1964 in Lincoln, the son of Robert E. Lee Sr. and Sara (Nichols). He married Ellie Tyler on February 14, 1997. They remarried on June 18, 2005. Mike was a life -long Lincoln resident. He graduated from Lincoln Community High School in 1982. Mike has worked for Landers and Area Disposal since 1993. He enjoyed camping, listening to music, and spending time with his family. He was a die- hard Chicago Bears fan.

He was preceded in death by his grandparents, father, mother, and step father Robert Sutton.

In lieu of flowers memorial donations may be made to the Family or to the American Cancer Society and will be accepted at the funeral home.

To send memories or condolences to the family please visit http://jenrosebuff.wixsite.com/welovemike