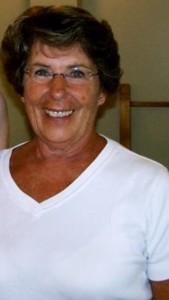 Phyllis Ann Brandt, 72, of Lincoln, passed away May 20, 2015 at Memorial Medical Center, Springfield.

Cremation rites will be accorded and a celebration of life will be held at 1:00pm Saturday May 30th at Immanuel Lutheran Church in Lincoln, Il. A time of fellowship will follow the service until 4:00pm Saturday. Holland Barry & Bennett Funeral Home has been entrusted with her care.
Phyllis was born January 8, 1943 in Princeton, IL., the daughter of James and Dorothy ( Martenson) VonHolten. She married Robert Brandt on February 23, 1964 in Rock Falls, IL.

She was a member of Immanuel Lutheran Church in Lincoln where she was active in the choir, Rachel Circle, and Couple’s Club. She was a member of the Zonta Club of Lincoln. Phyllis was an avid golfer and loved to fish and bird watch. She was a loving and devoted wife, mother, and grandmother.
She was a well suited farmhand. Phyllis and Robert worked together on the family farm for many years. Phyllis worked in banking for many years, retiring in 1995. During her child rearing years she was a cook at Chester East Lincoln School. Phyllis started Brandt’s Arcade Cafe in April of 1997 and sold the business in 2008, after 11 years.
Surviving are her husband Robert Brandt of Lincoln, IL., her mother Dorothy VonHolten of Williamsville, IL., her children Sheila ( Jay) Sheley of Lincoln, IL. and Jeffrey ( Sharon) Brandt also of Lincoln, IL., her grandchildren: Raeann Sheley, Jason Sheley, Nathaniel Brandt, Jenna Brandt, and Peyton Gleason, her brother Rodney ( Cathy) VonHolten of Bloomington, IL., and her sister Debra VonHolten of Williamsville, IL.
She was preceded in death by her father and her sister Vicki Grennan.

In lieu of flowers, memorial donations may be made to Memorial Home Hospice.