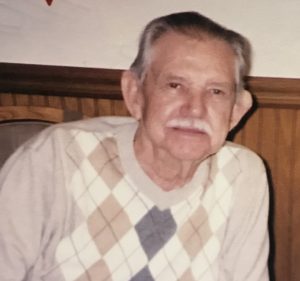 Richard Woodrow Miller, 94, passed from this life at The Christian Village on Monday, January 22, 2018.

He was born September 10, 1923 in Capon West Virginia, the son of Benjamin H. and Mabel Blackburn Miller. He was united in marriage to Betty L. Rodgers on September 25, 1947 in Lincoln. She preceded him in death on October 14, 2016. Richard was also preceded in death by his parents and sister, Ruth Daughdrill.

Surviving is his niece, Vivian Freeland of El Dorado, AR, great niece, Linda May of NC, Brenda Darden and nephew, Mike Burns of AR, his wife’s nieces Sherry Margrave, Rebecca Jones, and their families of AZ, Amy (Nathan) Chen and family of Brentwood, TN., and nephews David Rodgers of AZ and Dana Rodgers of Canada.

Upon leaving high school, Richard served his country in WW II as an Army Sgt. from 1942-1945 during which time he served as a squad leader in Central Europe, Sicily,, Normandy, Northern France, Rhineland, Ardennes. He received several military medals including the Purple Heart.

Richard was employed as a welder for the Illinois Terminal Railroad for many years. He was also a talented artist/painter and amazed his family and friends with his artwork. Richard was a member of Faith Lutheran Church.

The family would like to thank The Christian Village for their love and care given to Richard and Baeety over the past few years.

Funeral services will be held at Holland Barry & Bennett Funeral Home Saturday, January 27, 2018 at 11 AM with Steve Blaum and Ryan Edgecombe officiating. Visitation will be one hour prior to the service. Burial will follow services in New Union Cemetery, Lincoln with full military rites provided by the American Legion Post 263.

Memorials may be made to The Christian Village or the donor’s choice.