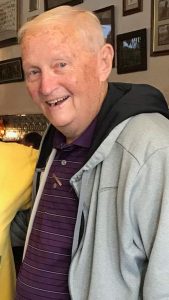 Robert Adderson “Bob” Taylor, 79, of Lincoln, formerly of Shelbyville, TN., went home to Heaven on April 21, 2018 at Heritage Care in Springfield with his family by his side.

Bob was born October 2, 1938 in Shelbyville, TN., the son of Franklin Gerald “Frank” and Enoria “Inez”
( Morrison) Taylor. He proudly served his country in the United States Air Force during the Vietnam Era where he received a Bronze Star for his service. He was a program manager and monitored communications and radio programs. Mr. Taylor made the Air Force his career, earning the rank of Senior Master Sergeant and the Civil Service rank of GS 12 in the United States Air Force.

Bob and Sumiko raised their family in Moreno Valley, CA., until her death in 1985. He then established a home in Shelbyville, TN. with Judy until her death in 2015. In August of 2015, Bob moved to Lincoln, IL., to be close to his Son and family. He enjoyed watching his son and friends bowl at Logan Lanes, driving his golf cart around the Elks golf course and neighborhood, and was affectionately known as the “trash man” for keeping the golf course and surrounding area clean with his trash grabber. Bob had a warm smile, giving heart, and all around loving personality. He often donated to programs such as Toys for Tots, The Wounded Warrior Project, Habitat for Humanity and many others. He loved the Lord and wanted to share his faith and blessings with everyone. He will be greatly missed by all who knew and loved him.

He was preceded in death by his parents, wife Sumiko, wife Judy, and brother Charles Taylor.

Memorial donations may be made to Toys for Tots and will be accepted at the funeral home.