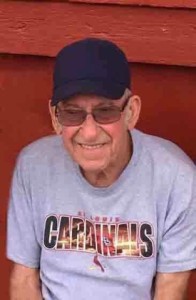 Visitation will be from 11 AM until 1 PM Friday, January 8, 2016 at Holland Barry & Bennett Funeral Home. Funeral services will be at 1PM Friday, also at the funeral home with Rev. Glenn Shelton officiating. Burial will follow in New Union Cemetery, Lincoln with full military detail performed by the American Legion Post 263.

Ron was born December 7, 1935 in Creve Coeur, IL., the son of Atwood and Lucy (Bunn) Mason. He proudly served his country in the United States Army. He retired from the Illinois Department of Transportation after several years of service. He was a member of the American Legion Post 263 and the Greenview, IL Masonic Lodge. Ron was an avid St. Louis Cardinals and NASCAR fan. His favorite driver was Rusty Wallace. He enjoyed camping and the outdoors. He farmed at one point in his life. Above all else, Ron enjoyed spending time with his family. He will be missed and lovingly remembered.

He was preceded in death by his parents and his sister Maxine Dibuono.

Memorial donations may be made to the family in care of Martha Bravi and will be accepted at the funeral home.