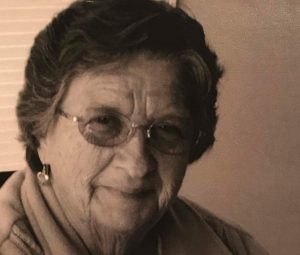 Rose Darline Landers, 87, of Washington, passed away August 16, 2018 at Washington Christian Village surrounded by her family.

Visitation will be from 11 Am until 1 PM Tuesday, August 21, 2018 at Holland Barry & Bennett Funeral Home, Lincoln. Funeral services will follow at 1 PM. Burial will follow at Harmony Cemetery, Beason.

Rose was born March 31, 1931 in Blencoe, IA., the daughter of Melvin Joseph Moore and Eva Lena (Mehrens). She married James Landers. He preceded her in death in 2001. She was a member of Prairieland Christian Church, Hartsburg. Rose was formerly employed at Cutler Hammer, the Bottle Factory, Christian Child Care, and was a volunteer at the Christian Radio Station in Lincoln. She was a prayer warrior for many. Her greatest joy in life was spending time with her grandchildren.

Memorial donations may be made to St. Jude’s Children’s Research Center and will be accepted at the funeral home.