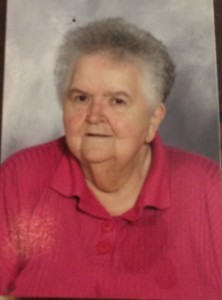 Rose was born May 16, 1933 in Logan County, Il., the daughter of William C. and Clara (Dunn) Wehner. She married Arthur Ferguson on October 23, 1952 in Logan County, IL. He preceded her in death in October of 1988. She was a member of the Oasis Senior Center, Broadwell Christian Church, the Ladies Auxiliary of Broadwell Christian Church, and was a Foster Grandmother at Adams School for several years. She was formerly employed in maintenance at Lincoln College for several years.

Surviving are her son Gary (Rebecca) Ferguson of Lincoln, IL. and her sister Betty Bauer of Nokomis, IL.

She was preceded in death by her parents, her husband Arthur, one brother Donald Wehner, and sisters AnnaMae Webster, Mabel Cosby and Ella Fuller, and her faithful companion Chubby Cherub “Pebbles”

Memorial donations may be made to Broadwell Christian Church and will be accepted at the funeral home.