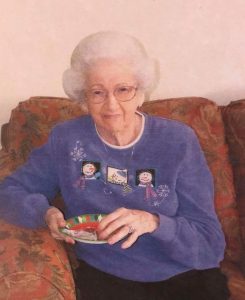 Visitation will be from 12 Noon until 1 PM Thursday, March 15, 2018 at Holland Barry & Bennett Funeral Home. Funeral services will be at 1 PM Thursday also at the funeral home with Ryan Edgecombe officiating. Burial will follow in New Union Cemetery.

Ruth was born April 17, 1924 in Lincoln, IL., the daughter of Jerry and Bertha (Keck) Werkman. She was formerly employed at Malerich Cleaners and as a bartender at The Tropics for many years. She was loving and kind to children, especially her great nieces and nephews. She enjoyed parties and family gatherings.

She was preceded in death by her parents, brother Robert Werkman, brother Albert Werkman, and infant sister Dorothy Fern Werkman.

Memorial donations may be made to Harbor Light Hospice at 3000 N Main St. Unit C East Peoria, IL 61611 or to Down Syndrome Research and will be accepted at the funeral home.