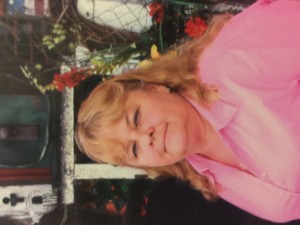 Cremation rites will be accorded. Visitation will be from 3pm until 6 pm Thursday, December 17, 2015 at Holland Barry & Bennett Funeral Home in Lincoln. Memorial services will be at 6pm Thursday also a the funeral home with Pastor Larry Crawford officiating.

Sheryl was born April 12, 1960 in Beardstown, IL., the daughter of Raymond Dean and Barbara (Smith) VanCleve. She married David Lee Hudson Sr. in December of 1979. Their love story crossed many boundaries and years. In September of 2014 they renewed their vows before God and their families. Just 18 hours after Sheryl passed away, David joined her. Unable to spend even 24 hours apart, Sheryl and David were reunited for eternity.

Sheryl was a member of Open Arms Christian Fellowship. She was employed at Community Action where she served as the Senior Nutrition and Transport Coordinator for 15 years. She then retired from Mission Mart after several years. She also at on the United Way Board for several years. Sheryl enjoyed shopping, especially thrifting. She always had time and abundant love for her grandchildren. They were her sunshine, the light of her life. Sheryl was a giving person. She always made sure that anyone that she knew of was taken care of. She went above and beyond to provide anything she could to someone in need, especially love.

She was preceded in death by her grandparents, her father, and her brother Timothy Prince.

Memorial donations may be made to Open Arms Christian Fellowship or to the Logan County Food Pantry and will be accepted at the funeral home.