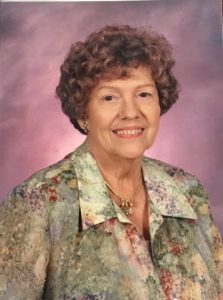 Shirley Joyce Westen, 82, of Emden, passed away Sunday, June 5, 2016 at The Christian Village.

Shirley’s wishes were to be cremated. Cremation rites have been accorded by Holland Barry & Bennett Funeral Home. A memorial gathering will be held from 9 AM until 11 AM Thursday, June 9, 2016 at the First United Methodist Church, Lincoln. Memorial services will follow at 11. Burial will be at a later date.

Shirley was born October 4, 1933 in Emden, IL., the daughter of Henry and Martha (Appenzeller) VanHilsen. She married Loren Westen on February 19, 1956 in Emden, IL. She was a member of Zion United Methodist Church in Emden where she was the organist for 52 years. Upon it’s closure she became a member of the First United Methodist Church in Lincoln where she served on the Nurture and Outreach Committee. Shirley was the first female employee at Farmers State Bank in Emden where she was employed for 15 years. She collected bells and angels and enjoyed flower gardening and being outdoors.

Memorial donations may be made to the First United Methodist Church, Lincoln or to the Emden Fire and Rescue squad.