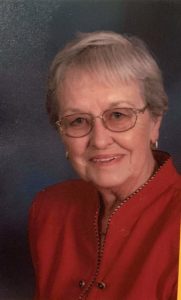 Sophia Louise Hill-Sosamon, 87, of Lincoln, passed away November 11, 2018 at home surrounded by her family.

Visitation will be from 5-7 PM Thursday, November 15, 2018 at Holland Barry & Bennett Funeral Home. Burial will be at a later date in Oaklawn, IL.

Louise was born October 23, 1931 in Newton County, IN., the daughter of Homer Otha Clark and Elizabeth Opal (Siela) Clark. She married Marvin Charles Hill. He preceded her in death in 1990. She later married Russell Dean Sosamon. He preceded her in death in 2003. Louise was a volunteer at ALMH for many years. She served as a volunteer for the Hope Mobile, Logan Correctional Facility, the Balloon Fest, and was a foster parent for many years. She retired from DCFS after 27 years of service.

Memorial donations may be made to the American Cancer Society, Safe Haven Hospice, or Christian Homes and will be accepted at the funeral home.